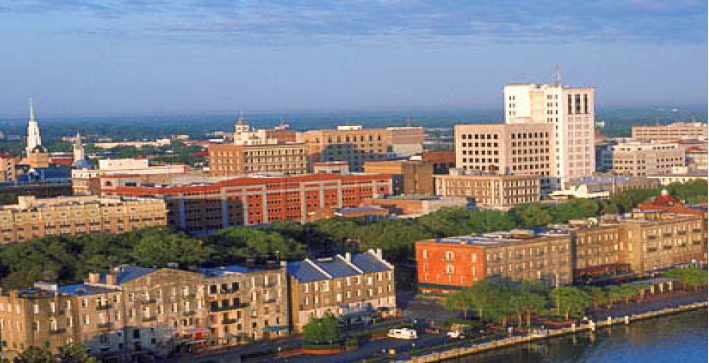 Savannah is one of the most popular tourist destinations in America and an exciting, interesting place to visit. October is a busy month in Savannah so it is suggested you make your hotel accommodations early. The Savannah Visitors Center is available for information and assistance http://www.visitsavannah.com

At dawn on Friday, October 9th The Coastal Heritage Association of Savannah will be commemorating the 236th anniversary of the Siege of Savannah Revolutionary War battle and placing a battle field memorial stone in honor of William “Fightin’ Billy” Tipton (1761-1849) who fought in the battle.

Extant records tell us that two men named Tipton, Englishmen both, arrived in the Colony of Maryland in British North America in the 1660’s.

Edward Tipton came ashore from the ship Friendship in 1688. This is the only record of this man of which I am aware. It is also the only documented arrival record for a Tipton in North America during these early years.

Jonathan Tipton arrived in Anne Arundel County, Maryland. A lifetime of records document GeorJonathan, his wife and children and his life in Maryland including his obituary which ran in the Maryland Gazette on 27 January 1757.

I have seen references to Jonathan and Edward being brothers but have not seen factual evidence to establish that relationship.

Statistics from the 2000 Census of the United States inform us that there were about 24,767 people in the country with the last name Tipton in that year. People with the surname predominate in the Southwest and are found least in the Northeast. Tennessee is the state with the most people named Tipton.

A poll of recipients of the newsletters of The Tipton Family Association of America led us to believe there are Tiptons in at least 35 of the states. At a recent meeting of the TFAA in Burnsville, North Carolina; Tiptons and Tipton descendants from seventeen states were in attendance.

So, what happened in between? How did the Tiptons move from Maryland to most, if not all, the states of the US?

Well, it had to start somewhere. I have made some inquiry to write on this question. It does seem that We Tiptons were constantly moving to the frontiers of North America from the days of Colonial America well into the 19th century.

Centuries of history are beyond the scope of this article but it did start somewhere so herewith is information about the moves of the first three generations of Tiptons in North America. While somewhat few in numbers, they do seem to have populated this continent until we find ourselves throughout the United States. And, this study can only include people named Tipton and does not count all the Tipton descendants!

Jonathan Tipton (1659-1757) and his wife Sarah Pearce Tipton had four sons: Thomas, William, Jonathan, John. This Jonathan is often referred to as Jonathan I. Three of the sons are well-documented in parish church records and the fourth is considered valid due to evidence that is not documented but more than circumstantial.

Thomas Tipton (1693-1763), the first son, was born in Anne Arundel County, Maryland and died in Virginia confirming his move.

William Tipton (1696-1726) was born in Anne Arundel County and moved to Baltimore County, Maryland where he died at the age of 30.

Jonathan Tipton (1699-1783) was born in Anne Arundel County and moved to Baltimore County in 1713 with his father, to Frederick County, Virginia about 1747 and on to the Western Waters on the Watauga River in Western North Carolina about 1775/76. This area later became part of the State of Tennessee in 1796. This Jonathan is often referred to as Jonathan II.

John Tipton (1702-1775) was born in Anne Arundel County and died in Baltimore County, Maryland establishing he did not settle outside the Colony of Maryland. It is believed John had two daughters but there are no records to establish the facts.

Thus we learn that the children of Jonathan Tipton and Sarah Pearce Tipton of Maryland established Tiptons in Virginia and North Carolina (Tennessee).

Note: Geographic areas can be hard to determine at certain dates in history because of the fact that governments, both colonial and later state, created counties that were subsequently sub-divided. Those first counties, often referred to as mother counties, could be very, very large. At one time in North Carolina’s history, all of the area of what later became East Tennessee was Washington County, North Carolina. The state’s original boundaries ran from the Atlantic Ocean at least as far as the Mississippi River. Similarly, the state of Kentucky was once one Virginia county.

Note: Unfortunately, records for female children’s births and lives are few and far between making it very difficult to establish their births and other events for daughters.

There is no evidence that any of their children accompanied them on their move to Virginia. It is possible Solomon and Sarah did so because of their young ages but no records support the idea. According to the records I have; William, Thomas, Jonathan and Luke died in Baltimore County while no place of death is determinable for Mary or Sarah.

Solomon Tipton (1732-1820) died in Ohio. Typical migration routes to Ohio from Maryland are not through Virginia so one might conclude Solomon did not accompany his parents to Virginia.
William Tipton (1696-1726), son of Jonathan I, and his wife Hannah Price had three children: Samuel, Sarah, Mordecai who were all born in Baltimore County. Samuel died in Baltimore County and I have no record as to the place of Sarah’s death.

He and his wife, Elizabeth, had three children: Edward, John, Sarah. Elizabeth died about 1735.

Edward Tipton (1728-1800), son of Jonathan Tipton, moved to Pennsylvania sometime after 1760 where he died, possibly in Bedford.

John Tipton (1730-1813) moved with his father to Frederick County, Virginia about 1747 and further south into the Shenandoah Valley as an adult. He moved to Washington County, North Carolina in 1783 in the area that later became part of East Tennessee. This John Tipton is usually referred to as Colonel John Tipton.

Sarah Tipton, daughter of Jonathan Tipton, was born in 1734. She is believed to have married her cousin, Mordecai Tipton, son of William Tipton. She and Mordecai moved to the Shenandoah Valley of Virginia.

Note: Mordecai and Sarah’s grandson, John Tipton, moved to Indiana where he became prominent as a General and a Senator representing Indiana in Congress.

Jonathan II and his wife Mary, who he married about 1735, had one child: William.

Jonathan II married two more times; first to a woman named Julithia about 1747 and next to a woman named Elizabeth about 1774. Jonathan had two more children, Joseph and Jonathan, but it is not certain which of these women was the mother of either child.

Jonathan Tipton (1750-1833) was the only of Jonathan II’s children to be born in Virginia in the Shenandoah Valley. This is the Jonathan commonly referred to as Major Jonathan Tipton.

Jonathan moved to Washington County, North Carolina about 1775 accompanied by his father and brother, Joseph. About 1795, he moved south across the Unaka Mountains into what was then and is still the mountains of Western North Carolina. Later in life, Jonathan lived in Middle Tennessee and died in Cumberland County, Kentucky.

Many Tipton family historians believe Jonathan II had two daughters, Mary born in 1752 and Elizabeth born in 1754. Neither daughter has been documented to my knowledge.

John Tipton (1702-1775) is a rather hazy fellow with reference to documenting his life. While undocumented, there are indications John married a women named Martha and they had two daughters: Mary and Rachel born in Baltimore County, Maryland but there is no evidence of their places of death.

Now we have established that this generation of Tiptons moved the family name to Tennessee, Kentucky, Ohio and Pennsylvania. Thus, Tiptons are now established in these states plus Maryland, Virginia and North Carolina (Tennessee as of 1796).

This third generation of Tiptons had many, many children in the fourth generation and were, no doubt, joined in America by additional Tipton immigrants.

TFAA President John Parrish will depart for England on May 11th for a three month visit.

At 10:30am on May 14th, he will make the presentation Tiptons in America at the Tipton Library, Tipton, The Midlands, England. During his stay, he plans to visit Shrewsbury in Shropshire and Yorkshire on the trail of our Tipton ancestors and their stories.

The embroidered Tipton family crest shown in the pictures above and modeled by John Parrish is available to all if you wish to have something embroidered. The set up fee has been paid so your cost would be the article you have embroidered and the charges from:
Doe Valley Printing, 1282 Riverview Drive, Elizabethton, Tennessee 37643. You can place orders by mail or contact Anita Remme at doevalley@comcast.net. or call (423) 542-4616