These are pages from the old Colonel John Tipton website.

We are moving them here for future references.

Colonel Tipton’s legacy can be found in the lives of his sons.  They all lived in East Tennessee:

served in the Revolutionary War and moved to the Watauga Settlements about 1783.  His church letter dated September 6th, 1783 was accepted in the Sinking Creek Baptist Church where he was a prominent member.  He sold the land which became the town of Elizabethton and is buried in the Tipton Family Cemetery in Elizabethton.  (The cemetery is now known as the Green Hill Cemetery).  Samuel was a representative in the Tennessee House of Representatives along with his brother, John.

was the second son of Colonel John and Mary Butler.  He was a Revolutionary War veteran who served under Captain John Wilson for five months in 1775 before being commissioned 23 February 1778 as an ensign in the Shenandoah Militia; on 29 April 1779 he took the oath as a lieutentant.

About the time his father moved to Washington County, North Carolina (now East Tennessee), Benjamin moved also.  It is not known if he lived in Washington County for any length of time before moving on to Blount County where he lived for many years.

Benjamin was married three times.  First to a woman named Starret but the date and details of the union remain unknown; it appears they had two sons: Benjamin and Joseph.  Second, he married Rebecca Ray in Rockbridge County, Virginia in 1780 with whom he had five children.  Third, he married Rebecca Cusick 19 December 1795 and they had six children.

Benjamin died in Blount County, Tennessee and is buried in Ellejoy Cemetery.  There was litagation over his will and the case is recorded in county records.  Information for Benjamin’s life is sketchy  and confusing.  One thing is not confusing; with the number of children he fathered, he has many descendants in the Blount County area.

was killed in March, 1781 on Beargrass Creek at the Falls of the Ohio by Indians.  At the time, he was serving as a Captain in the brigade of Colonel Joseph Crockett with the forces of George Rogers Clark.  This army was fighting the British and Indians in the Northwest Territory, territory claimed by the State of Virginia.

was the fourth son of Colonel John and Mary Butler born 13 Feb 1761 in the Shenandoah Valley of Virginia.

He was a veteran of the Revolutionary War enlisting early in 1778 in the Continental line serving under Colonel Richard Parker in the First Viginia Regiment.  In 1779, he was severly wounded during the seige of Savannah following which he mustered out after just under two year’s service.  In 1834, William applied for a pension and stated he had been on the Invalid Pension Roll since about 1782 and that he was forever unfit for duty following the wounds received.

After returning to the Shenandoah Valley, William and his step-sister, Phoebe Moore, became attracted to each other and married about 1781.  William and Phoebe moved about 1783 to Greene County in western North Carolina (later Tennessee) residing there until 1785 when they moved to the area that would become Knox County, Tennessee.  After 24 years or so, they moved again to Blount County, Tennessee about 1819.  Blount County is adjacent to Knox.

William was an early grant holder in the Cades Cove area of the Great Smoky Mountains amassing hundreds of acres.  He sold some land to relatives and others but in his will he bequeths 1765 acres named as Cades Cove property so at his death he was a large landowner.

William never lived in the Cove himself.  “His farm was near Tipton’s Station, near the dividing line of Knox and Blount Counties” according to researcher Ervin Charles Tipton.

Due to William and Phoebe’s large family and his wealth of land in and in the area of Cades Cove, they left many descendants in Blount County, Tennessee.

William was a very colorful man known in legend as “Fightin’ Billy”.  Stories abound about a relationship with Andrew Jackson and his trick to beat Jackson in a horse race; considering himself the lord of all he surveyed in Cades Cove; riding his horse into the stores of Maryville; and, while not considered a religious man, chiding a congregation over it feuding ways.  E. C. Tipton, a descendant, described him as a large man with red hair and very handsome. 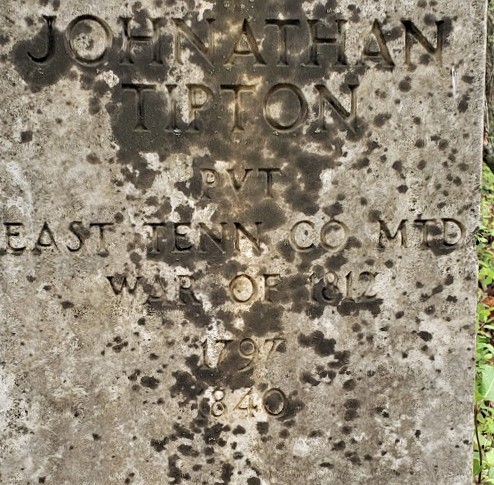 was a soldier in the Revolutionary War being present at Yorktown for the surrender of Cornwallis.  He owned extensive, productive farmland around Elizabethton and is buried in the Tipton Family Cemetery (now, Green Hill).

was killed at St. Clair’s Defeat in the Northwest Territory near modern day Fort Wayne, Indiana.  When Jacob was leaving for the Northwest, he told his wife to rename their son Jacob for him, if he didn’t return.  According to an article in the Knoxville Gazette for December 17th, 1791; Jacob, a regular US Army officer, was impatient to get to the fighting and joined some Kentucky militia first engaged.  When he received his mortal wound, he is quoted as saying “My brave fellows, I am a dead man; do you fight on, and bravely do all you can for your country”.  His heroism was recognized far and wide in the young United States.

Below is a photo of the monument erected by the US Congress to commemorate the fallen soldiers who died at St. Clair’s Defeat 6 Nov 1791.  This obelisk stands over the mass grave of those heroes.  Captain Jacob Tipton is buried in the mass grave and his name is inscribed on the base of this monument.  The monument is located in Fort Recovery, Ohio, site of the battle.  The monument was dedicated on July 1, 1913.

served in the Tennessee Militia and as a private in the US Army under his older brother Jacob at St. Clair’s Defeat.  He married Elizabeth Snapp whose father, Lawrence, was a close friend of his father’s in the Shenandoah Valley.  John had a long career as a Tennessee legislator dying in Nashville on October 8th while serving in the 19th Tennessee General Assembly.  The State honored him with a funeral procession and a monument at his grave site in the Nashville City Cemetery.  His funeral procession and the monument resolution were reported in the National Banner & Nashville Whig newspaper for October 12th and November 30th, 1831.  That article lists the order of the procession as follows: The Body, Relatives and attending Physician, Clergy, Speakers and Officers of both Houses, Members of both Houses, Governor, Secretary of State, Treasurer, Mayor and Aldermen of Nashville, President and Trustees of the University, Judiciary and Citizens.  In the 1890’s, the 49th Tennessee General Assembly replaced John’s original monument with a much grander one.  The monument inscription describes a life of service and a man “bold in conception and fearless in execution”.  Following his father’s death, John lived on the plantation at Buffalo Mountain.  He also inherited his father’s love for race horses as he advertised Don Quixote at stud in the Knoxville Gazette of February 24th, 1808.

was the eighth son of Colonel John and Mary Butler.  He served in the Carter County Militia and may have been a Captain which would indicate military service.

In 1791, he married Rebecca Lacy in Washington County, North Carolina which became part of East Tennessee when Tennessee became a state in 1796.  They had nine children.

Thomas and Rebecca lived in Washington County and the evidence indicates that they moved to Blount County, Tennessee between 1816 and 1821.  They moved to Walker County, Georgia about 1831.  Thomas’ date of death is not recorded but he was on the 1840 census in Walker County and not on the 1850 census however Rebecca was on that census.  A history including Walker County states Thomas and his son Samuel had a mill built southeast of Ringgold in 1835.  So, his death is postulated as between 1840 and 1850.

Thomas was an early settler in Cades Cove in Blount County.  Publications on Cades Cove show Thomas purchased 640 acres of land from his brother William in 1830.  Thomas and William recorded a land grant for 1255 acres on 16 Jan 1835.  Often, a land grant was issued and the land settled well in advance of the title being recorded.  As early as 1821, William recorded grants of 1280 acres and Thomas could well have been farming in Cades Cove at this time.  Thomas’ first son, Jacob, was killed in the Cove about 1821.

was a Colonel of the Carter County Militia who married Lavinia Adams Williams, a niece of President John Adams.  He served as a Sergeant in his brother Jacob’s company and was elected a Colonel of a Light Horse Regiment in the Tennessee Militia in 1822.  Jonathan spent some eighteen years as a Tennessee Legislator; he represented Carter, Washington, Blount and Monroe Counties.

Only child of the marriage of John Tipton and Martha Denton Moore Tipton.