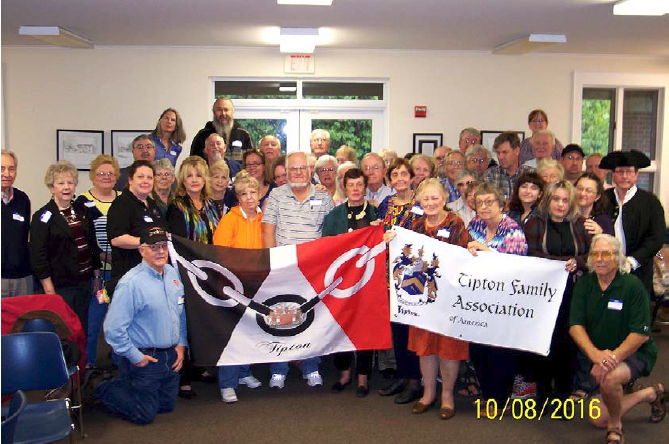 Pictured is the enthusiastic group of Tiptons and Tipton descendants from 14 states and Washington DC gathered to enjoy the day of programs and information about TFAA events and projects. The days programs included a visit from Colonel John Tipton (1730-1813), pictured on the far right, and a presentation The History of the Battle of the Lost State of Franklin by Judge David Tipton from Piney Flats, Tennessee.

In addition, the group introduced themselves and their Tipton line of descent so they could identify others in their line, become better acquainted and share mutual family history.

The meeting was held in Johnson City, Tennessee at the Tipton-Haynes State Historic Site, home of Colonel John Tipton from 1784 until his death in 1813. Following the Colonel’s death, his son John lived on the farm until 1831. In 1837, the Tipton family sold the property.

On Friday night before the meeting, a social dinner was held at the Carnegie Hotel in Johnson City. Well attended and enjoyed by all!

With the completion of the TFAA project to put the book We Tipton and Our Kin by Ervin Charles Tipton on CD, the Association adopted as its next project placing a Tipton Family Historic Marker on the grounds of the Sycamore Shoals State Historic Area in Elizabethton, Tennessee.

The Family was one of the earliest and largest families to settle in the Watauga Settlements arriving from about 1773 onward. This frontier in East Tennessee was part of colonial North Carolina at that time.

At present, the TFAA has approval from the Historic Area to place the sign but has not applied to the Tennessee Historical Commission to be granted an official marker. It is likely that application will be filed in February, 2017. As the project goes forward, more information will be furnished the membership including the wording of the marker.

Cost of the project is estimated to be $ 2,000.00. Donations to the project have been received so far in the amount of $ 750.00. If you wish to donate to this project, please do so ASAP allowing the TFAA to proceed on solid financial footing.

The membership decided the 2017 meeting of the Tipton Family Association of America will take place in Covington, county seat of Tipton County, Tennessee. The meeting will be on Saturday, October 7th.

Tipton County is on the Mississippi River in West Tennessee. The county was named for Captain Jacob Tipton (1765-1791) who was killed in conflict with American Indians at the historic battle known as St. Clair’s Defeat. The battle took place on November 4th, 1791 in the Northwest Territory of the United States in present-day Ohio along the Wabash River.

Meeting in Tipton County will give Tiptons and Tipton descendants in areas in the middle of the United States close proximity to the meeting location and, if flying in, access to utilize the major airport in Memphis, Tennessee. Covington and Memphis are 39 miles apart. 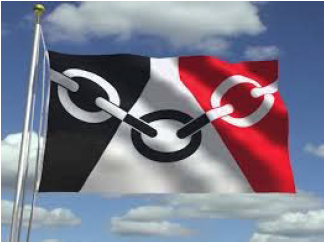 If by chance, you’re reading this and thinking “wouldn’t it be wonderful to visit the Tiptons’ ancestral home in the Midlands of England and see this beautiful flag flying on the streets!”

Well, the TFAA may have just the answer for you.

The membership assembled, instructed the President to inquire into organizing a Tipton Family Association of America Tour to Tipton. No more details are available at this moment but I will be consulting travel professionals and getting the information.

Just imagine how grand for our group to travel together to Tipton, England!

Speaking of Tipton, England.
The Tipton Library is creating an exhibit to open for Valentine’s Day, 2017 including
Tipton Brides of the United States.

We Tipton and Our Kin
have been invited to be part of the exhibit. Please share photographs of your Tipton family brides (Tipton by name or a descendant; grooms can be included) for this exhibit. Send the picture you wish displayed along with the names of those pictured, the date of the nuptials and the location of the ceremony.

This is a fun and exciting project. Two Tipton bride’s pictures have already been sent.
So very nice for us to be included.

Without delay, send your pictures and information to the TFAA via email at parrish968@aol.com or by snail mail to the TFAA at Post Office Box 1128, Milligan College, Tennessee 37682.
If you have questions or need further information, just ask.

Do understand, the photos cannot be returned so send copies or ones you can spare.

Serious Questions Have Arisen About the actions and governance of the Board of Trustees of the Tipton-Haynes Historical Association, Inc., which operates the Tipton-Haynes State Historic Site in Johnson City, Tennessee.

Of most importance to Tiptons is the fact that our cousin and TFAA member; Karen Tancill of Racine, Wisconsin, bequeathed the Association approximately $ 107,000.00 in her will and at her death about three years ago the funds began to be available to THHA, Inc. Through her last will and testament, Karen stated very simply and straightforwardly that the funds were to be used for capital improvements.

One thing that could concern everyone is the fact that two current Trustees that were on the Board of Trustees in part or all of 2014 and 2015 are still serving as Trustees. One is current Board President Cheryl Smith and the other is Tony Galloway, President for some portion of 2015. So, these two Trustees who may have been involved in the actions and governance described above are still in a position to make decisions and act in the present.

It is understood that the Tennessee Department of Environment and Conservation is auditing operations of Tipton-Haynes Historical Association, Inc. and Tipton-Haynes State Historic Site.

Obviously, the above circumstances and actions present the question “What should I think of this and/or what should I do?”

The Tennessee Department of Environment and Conservation audit results will be public information and I intend to obtain a copy of that report and can make the report public.
Personally, I do not believe persons involved in any past questionable decisions and actions that continue on The Board of Trustees should remain on the Board and in a position to guide the Association.

Tipton descendant Cynthia Putnam requests information about Temperance “Tempie” Ann Tipton (1856-1899). Temperance was born and deceased in North Carolina. Her father may have been one of the John or Joseph Tiptons. She married Lewis A. Butner (1857-1930). They are buried in Burnsville, North Carolina.

If you have any information about Temperance, please contact Cynthia at
Cmputnam55@gmail.com or (843) 873-6519.

Cynthia planned to attend the 8th October meeting but was kept at home by
Hurricane Matthew. 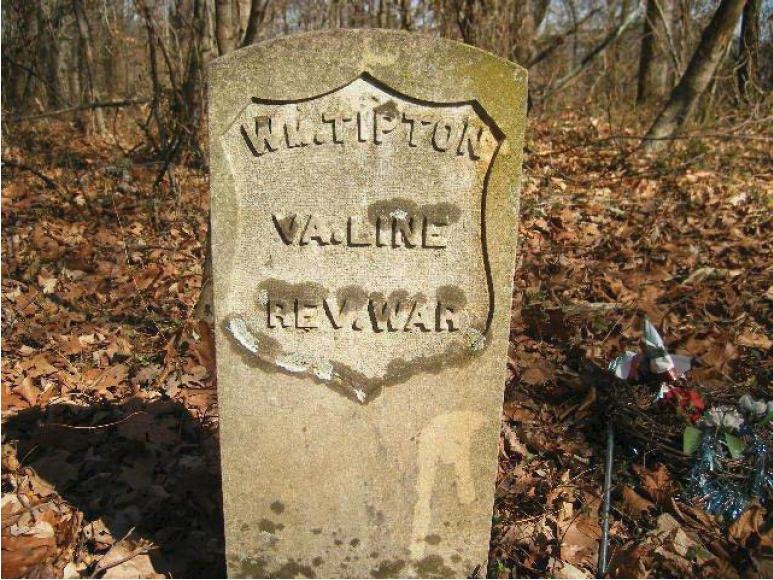 Pictured above is the gravestone of William “Fightin’ Billy” Tipton born in 1761 and deceased in 1849. William lived most of his life in what is now Blount County, Tennessee. He is considered the first grant holder in the Cades Cove area of the Great Smoky Mountains. Today, Cades Cove is within Great Smoky Mountains National Park. Park Headquarter’s address is 107 Park Headquarters Road, Gatlinburg, Tennessee 37738.

Many ask what the amount of TFAA ‘dues’ are?

While never set in specific dollars by the membership, $ 25.00 is the suggested amount; however, many donate more and some donate less. TFAA’s largest expense year in and year out is the reproduction and mailing of newsletters. In some years, the expense of the annual meeting is more due to the location of the meeting.

In addition, the accomplishment of Association goals such as establishing a website, honoring William Tipton in Savannah and, recently, producing We Tipton and Our Kin on CD have been achieved with Tipton Family Association of America funding by membership donations. TFAA money is well-spent promoting our family history and genealogy.

Our cousin Kay passes along this link
http.//www.findagrave.com/cji-bin/fg.cgi?page=gr&Grid=46155259
regarding Abraham Hiter Tipton (1808-1885)
if you are seeking information on this line.