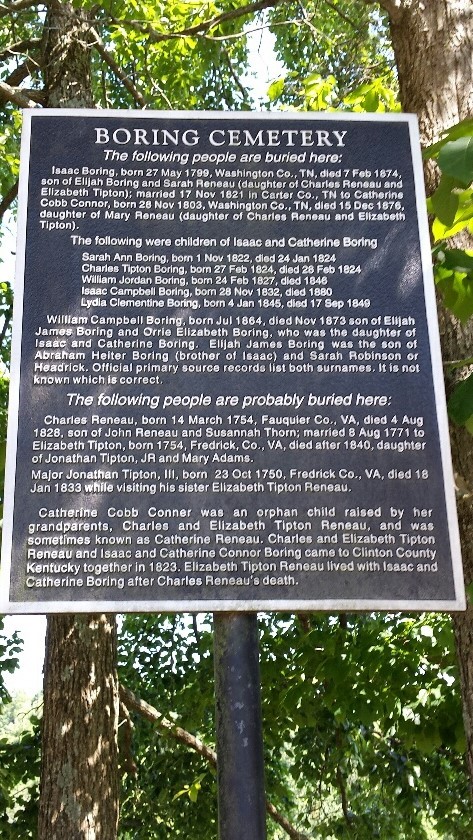 The Boring Cemetery is located in Clinton County, Kentucky but in the year of Major Jonathan’s death the site was in Cumberland County, Kentucky. The cemetery was a small family cemetery and today is located on private property about four miles south of Albany, Kentucky on Wolf River Dock Road (Kentucky State Hiway 738).

The sign states Major Jonathan died while visiting his sister Elizabeth Tipton Reneau. The cemetery is located near the Kentucky/Tennessee state line; Overton County, Tennessee is across the state line to the south.

TFAA member David Tipton and President John Parrish located the burial site on June 9th, 2017. Locating the burial site was the culmination of a research project David and John began in the spring.

Major Jonathan was a Revolutionary War veteran who fought at the Battle of Kings Mountain and afterwards served under General Nathaniel Greene in South Carolina. He was born in the Shenandoah Valley of Virginia and moved to the Watauga Settlements of what is now Carter County in East Tennessee about 1775 with his father and brother Joseph. In 1776, he was a signatory of the Watauga Association’s petition to North Carolina requesting government west of the mountains. East Tennessee was then part of North Carolina and separated from the populous parts of that colony by the high mountains of the Appalachian Chain.

Around 1796, Major Jonathan moved across the Unaka Mountains south of Carter County; he is recognized as the founder of Tipton Hill, North Carolina. Having three wives/partners, Jonathan fathered thirteen children. About 1825, he moved to Overton County, Tennessee and in 1832 applied for a Revolutionary War pension in Overton County.

David, John and the Tipton Family are indebted to the generous time and effort afforded by people in Kentucky who helped us succeed in this quest. For decades, Tiptons and Tipton descendants have sought to find Major Jonathan’s burial site. It was a mystery that had become legendary within the family. Time and again the quest ended in failure.

After examining records, we traded thoughts with Pat Campbell, Property Valuation Assessor for Clinton County in Albany, Kentucky. Mr. Campbell turned to local historian and former teacher Ms. Betty Reneau who gave us the breakthrough information. Ms. Reneau is the great granddaughter of Isaac Tipton Reneau. Mr. Campbell’s knowledge of the county’s geography translated Ms. Reneau’s information into a location on Wolf River Dock Road! Once in the right neighborhood, the landowners gave us permission to locate the burial site on their farmland!

The tombstones in the cemetery are sadly just remnants today. They are broken, buried and illegible because of age and erosion.

Pictured below is proud Major Jonathan descendant David Tipton at the burial site. 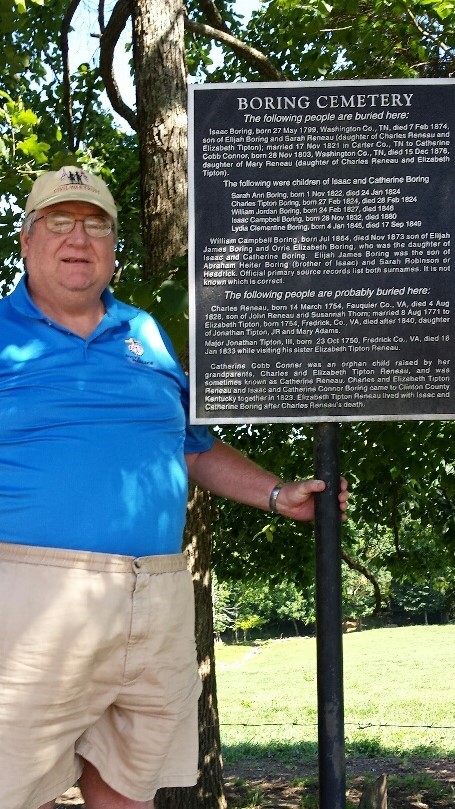 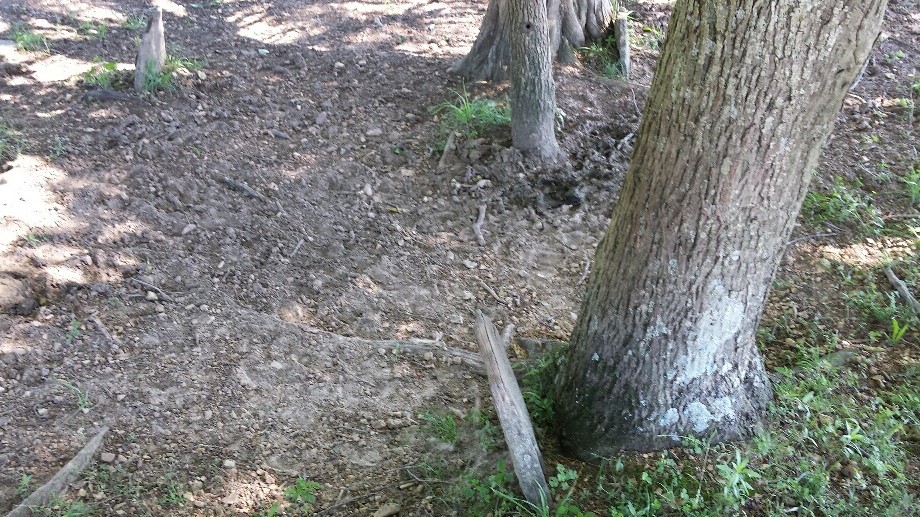 From Our Friends in Tipton, England

Jeff Worsey, President of the Friends of the Tipton Library, sends the Library’s hearty “thanks to our American cousins who kindly sent their wedding photos to be used in our display”.

And, the Tipton Library is extending an invitation to its American cousins to submit photos for display this year.  The upcoming exhibit is Childhood Days – Were you a child of the 20th Century?

Jeff asks the photos include information about where and when they were taken and the name of the school for any school photos. Include the names of those pictured and also the photographer if you wish. Send the pictures to the TFAA and they will be forwarded to England.

The Tipton Family Association of America Resurgent!
Beginning in 2008, The TFAA has expanded exponentially to include Tiptons and Tipton Family descendants in all 50 US states and strong connections with the family’s ancestral home in Tipton, England.

The pictures below are of our 2010 meeting at the Carter County/Elizabethton, Tennessee Library. At the podium is President Tom Manning who so ably kept the TFAA gathering in the prior years.

At this meeting, goals were adopted to begin meeting annually. Second, it was decided that a website would be developed for the Association and we do all we can to expand membership.
At this meeting, John Parrish was elected President. Fifteen people attended. 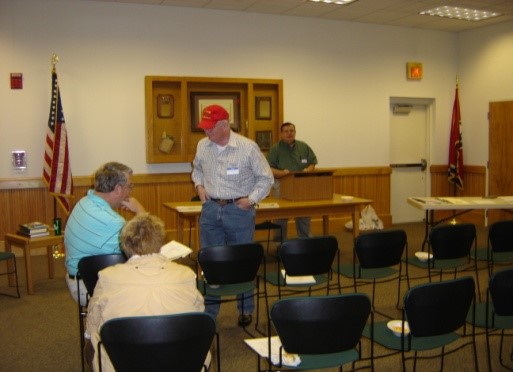 At the podium is President Tom Manning 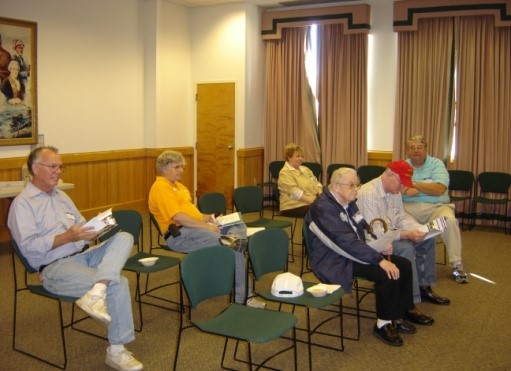 On 8th October 2011, the TFAA had a successful meeting at Rocky Mount Museum in Piney Flats, Tennessee.  Rocky Mount, the home of the Cobb family, served as the first capitol of the Territory South of the River Ohio established by Congress.  Tennessee was part of the Southwest Territory.

The gathering below pictures those attending the TFAA meeting on 6th October 2012 in Townsend, Blount County, Tennessee.  Obviously, attendance is much increased!

By now, annual Association meetings have been established.  It was decided that the Association will meet on the second Saturday in October during the Columbus Day weekend.  And, that the location for the next year will be chosen.  Further goals were establish in Townsend as follows: publish a digital copy of We Tipton and Our Kin; place a monument in Savannah to commemorate William “Fightin’ Billy” Tipton’s participation in the Revolutionary War Battle of Savannah; place an historic sign at Sycamore Shoals State Historic Site in Elizabethton to recognize the Tipton family; place an historic sign in Woodstock, Virginia to honor the Woodstock Resolutions signed by Colonel John Tipton in 1774; continue to develop the Association website: www.tiptonfamilyassociationofamerica.com.

A motion was made and passed that the President be elected for a four year term replacing the annual election. John Parrish was elected to serve for four years.

On 11th October 2014, the TFAA met in Bristol, Virginia. 2014 was the year the Association began including a Friday night dinner on the meeting schedule.

The 2015 meeting was held in Savannah, Georgia as we gathered to attend ceremonies honoring those who fought in the Revolutionary War Siege of Savannah Battle which took place in 1779. The TFAA contributed the funding for the memorial to William “Fightin’ Billy” Tipton who fought in the battle and was badly wounded. William was the son of Colonel John Tipton.

Below is the meeting attendees’ picture.

With the placement of William’s memorial, the TFAA accomplished a third goal after meeting annually and creating our website: www.tiptonfamilyassociationofamerica.com

Now, on to Covington, Tipton County, Tennessee for the 2017 meeting on 7th October at the Tipton County Public Library on the campus of Dyersburg Community College.

Friday evening at 6pm everyone is invited to join our cousins for dinner at the Wyatt Earp Steakhouse located on the Covington Town Square.

Newsletter # 28 announced the meeting and had many details of the event.

More specific details of Saturday’s schedule will follow in subsequent newsletters but I can tell you our meeting will be visited by DC College President Dr. Karen Bowyer; Covington Mayor Justin Hanson and programs will be presented by County Historian Russell Bailey, County Genealogist David Gwinn and Tipton County Museum Archivist Sherri Onorati.

For information about accommodations in Covington, contact the Covington-Tipton County Chamber of Commerce at (901) 476-9727 or online at
www.covington-tiptoncochamber.com

Our website has many interesting features. One of the useful features is that the Newsletters beginning in 2010 and thru Newsletter # 28 published in Winter 2017 are archived in the section headed Newsletters.

If visiting the website online is not one of your habits, you can order any or all of the indicated newsletters for $ 3.50 each plus $ 7.00 postage and handling. Simply send your order to the TFAA at the above address.

The Historical Marker Project for Sycamore Shoals State Park, Elizabethton, Tennessee
I am happy to announce that this project is being researched and managed by TFAA member Charlotte Dade of Kingsport, Tennessee. Charlotte is very experienced and accomplished in historical research and will do a wonderful job with our project. Her goal is to have definitive information for the membership at the October meeting in Covington.

This newsletter is compiled and distributed by John Parrish, President, The Tipton Family Association of America and on the worldwide web at TiptonFamilyAssociationOfAmerica.com

Please make your membership donation to the Tipton Family Association of America by mail or by using PayPal on the TFAA website: www.tiptonfamilyassociationofamerica.com